People have accepted isolation, separation from their loved ones, humiliation and anti-social distancing, all in the name of social responsibility. Such irony. People have conflated the term "woke" with the systematic brainwashing of an entire Cancel Cult - more irony. And many who do not identify with the Cult nonetheless empower it through acceptance.

Then of course, there are those of us who are woke in a different sort of way.

People have accepted the power of authority to enslave them, while others - nearby or farther away - defy an opposing authority in a completely different context. Many people believe that "this too shall pass" if they are obedient, patient and vigilant. But it will NEVER pass as long as they are obedient, patient and compliant. COVID 20 is on the horizon.

The irony manifests in anger and regret as conformity reveals the betrayal, and the motives behind the hidden overreach into global authoritarianism. And yet, there is cause to celebrate the resilience of nature and the endurance of evolution and natural selection. Human beings are surviving the release of a genetically modified virus thought to be capable of pandemic intensity. And we are responding with a far less than 1% global fatality rate. As the virus mutates, so does our immune response. How amazing it is that our bodies can adapt to a novel virus (not naturally occurring) with such effectiveness.

Similarly, humans have evolved over millennia to identify and defend against the stealthiest of predators - even those of the same species. And many who are obedient, compliant and patient, will also gradually become "awakened" in a different sort of way. 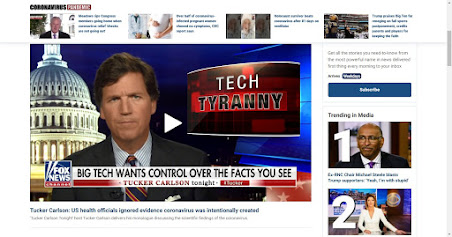 We watch with joy as Black Americans, empowered by America's historic and unprecedented strides against racism in the 60's, 70's  and 80's rise up against the new FAKE racism designed to keep them enslaved by a new generation of masters - masters which control a derived narrative through their mainstream media outlets. We watch them call out this fake racism in the political arena, in social media and alternative media!

Drunk with power, the 1% continue their futile attempt to remake America - the shining light of a self evident truth that all men are created equal - into some dark, racist, white nationalist Reich. And they use the technology and fake "fact checkers" that we formerly trusted to implement the technological betrayal which Roacheforque has warned of for many years now. Can you not see today the manifestation of those warnings? Fintech will make you dependent on the tyranny of money completely under the control (in real time) of the banks. Social media will be used to spy on you and your smart phone will be used to track and trace you, and to control your behavior through social scoring.

As confidence in technology fails, we will see our friends, neighbors and relatives rise up to quell the psychological war of wills between the American ideal of individual liberty and justice, and the banking class aristocracy's desire to create a world plantation of transhumanist slavery, through their destruction of nation-state sovereignty, cultural pride and social governance - to be brought about by their cancellation of self sufficient middle class economies.

It will all happen when we become fed up. And we are getting fed up ... with the cancel culture lockdowns, the destruction of private property and the death of small businesses. We are fed up with their giant, poisonous corporations demanding 100% market share. And we reject their debt based global economic reset of shared wealth through the abolishment of underclass property ownership.

What must happen now however is cataclysmic. Because as long as we have "economic insurance policies" backed by an unlimited quantity of fiat currency, covering the future of "interest rates", "currency exchange rates", "equities" and "commodities", the issuer of the fiat currencies denominated in these financial derivatives and their global futures casino has complete control over the global economy.

It simply isn't understood by the little people (and never even whispered about by wealth Giants) that financial derivatives ARE the futures market. When sums of money so vast (many hundreds of trillions) are leveraged into future positions ... upon which counterparties can gain or lose equally vast fortunes, powerful actions are taken to actuate those outcomes. It takes more and more leverage to keep such a system going. You need a black rock to manage bigger, darker pools and 20 trillion on the Fed's balance sheet (which never "leaks into" the little people's economy except through the narrow sieve of their 401K's).

The entire casino economy must go. It feeds upon productive value creation like a cancer. Yet most people cheer it on, drunk with the prospect of profiting through the rigged stock market. Even a cave man can play that game. But it cannot go on.

And yet the approaching monetary accord (the Davos "reset") will simply be an exchange rate policy agreement, and a further repositioning of the dollar and SWIFT, as alternatives are codified and contract law is reviewed. Or will it?

Gold will rise in currency terms, as usual, for all the wrong reasons. Or will it? There is tyranny, and hope. Tyranny evident in the world of today. Hope in a future, only because it is always and forever unknown. But the people of America are waking up ... even the Woke.

Posted by Roacheforque at 11:40 AM