On March 12th I asked readers, somewhat rhetorically, "which Covid 19" did they believe in? It was a way to introduce the idea that what we are experiencing could either be a complete hoax, or a bio-engineered plague that will decimate the planet. And of course it could be (and most likely is) something in between.

But the current situation has morphed into something much more dangerous. We may have entered new territory, where the misperception of COVID 19 is more dangerous than the virus itself.

It is fascinating to engage in online discourse at ZERO HEDGE for example, where there is an overwhelmingly singular sentiment - that COVID 19 is a little worse than a normal flu maybe, and that the mainstream media, and left wing academics, are blowing this thing way out of proportion to create panic and herd the little people into isolation camps where they will be tattooed with some digital tracking biometric implant, or some such shit as Bill Gates owns the patent on, etc...

The lathered frenzy is so manic, the commenters over there don't even recognize sarcasm (although the average comment can fairly be summed up simply as "bullshit!"). So at this point, I'm not at all unconvinced that either (1) there is an agenda over at the Hedge whereby a lot of unemployed people are "posting for money" from an anonymous text they received, or (2) a large portion of relatively normal and formerly like-minded rational thinkers have lost their ever-lovin', mother-fuckin' minds.

Now ... for those of us that can work an excel spreadsheet, let's make this simple and clear. What we have below is an image (so nobody has to click a column header) of the number of NEW deaths as of yesterday (4/17/20) attributable to COVID 19. 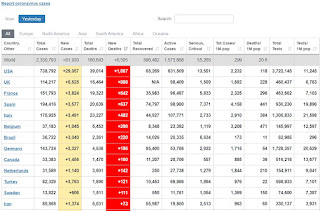 When we spend a little time reading other credible news reporting sources, we find that the USA high caseload, it's high death count, it's record setting new cases and its record breaking new deaths are the result of poor planning, lax standards and just generally not taking precautions seriously. I'm not going to link to all those articles, but Zero Hedge is full of them, as well as articles which call bullshit on all of those. In essence we have extreme polarity as usual. Yet, below every single one of those articles are rows and rows of commenters crying "BULLSHIT!" "It's a HOAX!""OPEN SHIT UP" "LET'S GET BACK TO WORK".

Christ, what a mess. These numbers, along with corroborating news that describes logistics, timelines, lag times, response times, hidden numbers, missing numbers, social reaction, political reaction and various misinformation all form a complex picture. But the numbers bear them all out. Moreover, it is simply impossible to have some coordinated global psy-op plot that captures all this information from so many disparate sources under one master plan to create global panic for some reason that cannot possibly benefit "the powers that be". In short, there is no single entity powerful enough or capable enough of masterminding such a coordinated plot as the growing throngs of tin foil hatters seem to be gloriously (for once) united upon.

With one possible exception (postscript).

Now, having said that, the column headed "Deaths 1/M pop" is an important one. Deaths per million is the metric that tells us how our medical response is coping, population wide, with the onset.

We will really fuck this number in the US of A over the next few weeks if we don't start taking this man-made bio-weapon experiment seriously. How can people read about the juxtaposition of HIV DNA in a SARS virus and believe it to be a naturally occurring phenomenon? Even when the top expert in this field has come out and said that's impossible.

How can we believe in the news that this dangerous experiment took place in the WUHAN Level 4 bio-lab, as US Government sources allege to create a pretext for China's payment of reparations worldwide (including maritime piracy suggested as a means to force place claims in lieu of contested legal compliance?). Still part of the hoax?

What makes quite a bit more sense to those who view the world through the lens of rational thought is that the US Government doesn't give a rats ass about its general class of citizen, and if the 90% or the 80% want to go back to work, let the governors "free" them and contagion be damned - they can all die as long as the 10% are cordoned off in their high quality virus free cocoons.

The war with China is about protecting the claims of the rich and powerful, just as the financial response has been. Trillions for the systemically connected and a couple billion swishing around in unconnected puddles for the little people to try and sop up amidst the usual bottlenecks and corruption. That is something you can believe in.

To believe that the narrators of the propaganda pulpit and it's mainstream media arms have contrived a "massive health crisis hoax" to instill panic and crash the fragile debt based economy? Just to put forward a vaccination and surveillance agenda? Just to crash the derivatives markets and create a global depression? To benefit who?

That's a conspiracy theory I wouldn't bet my life on.