Many people seem confused about the inexplicable and unpredictable "financial markets". This includes the recent action of cryptos. Most of this confusion stems from the problem of using an "old paradigm" framework in a "new paradigm" environment.

Most market watchers, at least the vocal ones, operate from a pre-1990's framework of how financial markets "worked" before the advent of financial derivatives.

It was not that long ago that the many hundreds of trillions in forwards, swaps and other financial instruments shown below simply did not exist: 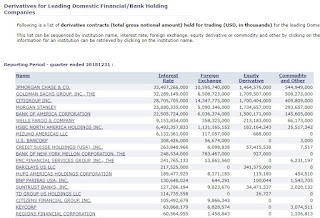 But today they are the very foundation of the global dollar system. How long does it take for a medium sized country to spend 2 trillion dollars on various commodities for its population? Hard to say, but five banks have positions of 2 trillion in the commodities derivative marketplace today. You see, soybeans and pork bellies are irrelevant, it is the movement of their price in dollars which is the item traded.

Likewise, so called "dark money" in the form of lira, ruble, peso or riyal are irrelevant. But dark money issued in yen, euro, pound or yuan - and especially the US Dollar - these are relevant.

The financial markets are no longer mechanisms of supply and demand economics for goods and services. They are a derivatives casino for the currency trade. In most cases the item traded is truly the dollar. Another noted this explicitly in terms of the gold derivatives market, but all markets operate in this manner - the gold market being different because the underlying asset of physical gold is the only true form of real (not derivative - not debt-based) money.

But gold is not the point of this post. It's separation from paper currencies is. The issuing authority of a paper currency not pegged to gold has the absolute power which the derivatives casino affords. Is that currency relatively stable? Is it widely used in global trade? Is it widely held in sovereign reserves and the global bond market? Is it deeply embedded in its own self-referencing financial market? And finally, is it the preferred denominator as a betting chip in the worldwide derivatives casino? If yes to all, then you can rest assured that it is the item traded world-wide in every type of market known to man.

These concepts are taken for granted without their implications being fully recognized. Articles and posts are written everyday which support the core concept that it is the paper currencies which are the item traded in every marketplace where massive derivative positions exist - the bond market (interest rate derivatives) the equities market (stocks), the commodities markets and the currency markets themselves (FX derivatives). You see these four markets above and you see the handful of too-big-to-fail mega-banks which hold the lion's share of over nearly a quadrillion USDs in futures market positions.

And these are just the publicly visible positions from call reports. OTC mostly, secondary insurers like AIG and Generali are not generally visible here.

And then we have the dark money continuum of the US Treasury and ESF (the financial arms of the Dollar System Military Weaponization Construct), the Federal Reserve System and it's primary dealers (the largest of which are shown above, a.k.a. the dollar system's Bailout Queens) whose main shareholders are the generational wealth dynasties who own the FED by virtue of voting rights and sit on the board of directors of the BIS.

This is the dollar paradigm which has turned the global financial markets into a massive confidence scheme ... not a PONZI scheme as some have likened it to. A Ponzi scheme is a qualitative level below the dollar system CONfidence scheme. It requires a flow of investors in a pyramid scheme structure who are willing to offer currency units for profit. The Dollar System requires no investors - it only requires an unlimited flow of the units of denomination and because those units control the price of everything (including gold) the issuer of those fiat units has ultimate control of the price of ALL underlying assets.

This is why the assets themselves are irrelevant (including gold). It is the denominator, the currency unit, that is prized above all. Who would rather have a thing that money buys when money buys everything? Ask yourself truly, do you really prize a stock, or the company it represents, or do you prize the profit, in currency terms, which that stocks future performance promises. Today, the issuers of the world's betting chips have guaranteed future performance, as only they can - and must - to keep the dollar paradigm in place.

Truly, nearly everyone lives in a dollar paradigm which they accept wholeheartedly without understanding it's implications.

Nearly everyone. Think about it ... and allow the flower of understanding to grow.
Posted by Roacheforque at 1:37 PM