Ladies and Gentlemen. Welcome to the spectacle of your lifetime. In this corner, we have the Federal Reserve DOLLAR System, Soros and the Clintons, certain high ranking members of the intelligence community, etc. - the Anglo-American contenders. And in this corner, we have the international banking and generational wealth interests, the BIS, IMF and World Bank - The Internationals (also the incumbent world heavyweight champion).

The so called DEEP STATE is more aligned with the new money Anglo-Americans. Pence, Trump and the BIS Internationals are on the opposing side, defending their title.

The various power factions have never been more fragmented. It can be confusing, because the Anglo American dollar faction wants globalism too, they just want it under their control. The BIS Internationals already have this control, and they plan to retain it. It's a classic Oedipus style tragedy really. The dollar faction has grown powerful, and it now believes it can sit "at the head of the table". Same mistake the British monarchy made. But when revolution was fomented, the Rothschild bank found its way to the winning side.


Generational wealth has time on its side. All debt based systems have a finite timeline, including the dollar. In the sci-fi classic Blade Runner, the Tyrell Corporation engineered a 4 year self destruct sequence into their replicants as a safeguard against rebellion. So goes the dollar, albeit with an undetermined expiration. And today, as the dollar nears the end of its inevitable retirement, it goes on a Roy Batty style rampage to save itself from its genetic deficiency - its Triffin dilemma (and associated countdown to extinction).

The generational wealth dynasties who continue to rule over mankind (through its willing acceptance of a debt based existence) have seen reserve currencies come and go, always represented by a single country. 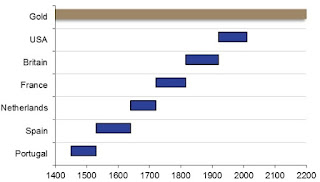 Today, countries are in debt to the BIS through their central banks. Those central banks loaded their balance sheets with the bailout of their primary dealers. The bond holders of those primary dealers represent the worlds true "senior capital pools". Do you not recall how governments had to bail out their positions? To prevent the world from being plundered back to the stone age? How's that for global WMDs? And only a few independent central banks remain, as in Syria for example - they will go the way of Libya one way or another..

When people scream about the CRAAASSH that's coming as a result of sovereign balance sheets being burdened with debt, what they fail to realize is that all this is under control. The plan is to have a supra sovereign wealth reserve and unit of account under the BIS/IMF system, which "bails out" the sovereigns in a managed bankruptcy instead of World War III. We already did this in 2008, and are continuing to - we just need to formalize it (as we did in 1934).

Allowing the dollar to pretend to manage this global bankruptcy of governments merely accelerates its own demise - it will extinguish itself through the lack of foreign support that comes with "identity politics", a symptomatic dilemma perhaps as problematic as Triffin's. A single nations advantage of managing the wealth reserve of all nations is fatally flawed because it gives rise to its own power agenda. Each nation has its own agenda, its own self-serving interests - the interests of its power center. Even the Euro system takes sides - it is not big enough, or impartial enough to make the dominant play.

We saw this with the greed of Britain, and it's concomitant American revolution. Now we witness the challenges of the American Empire through its dollar system fatigue. The Internationals reason that a hot world war can be averted with a global reserve asset alternative that represents the interests of the opposing nations, under the management of an independent BIS / IMF.

The dollar system regional wars (sanctions that you see today) will accelerate this change. The global, national, regional and local conflict will continue for as long as it takes for Americans to realize that their current Anglo-American masters are not impartial enough. The masses have been sold a different cause for the same effect. "America First". In their relative isolation, they will hardly notice the economic implications of their "national currency" solution. They will buy American products with American dollars (foreign products will be too expensive anyway).

And ... if it takes war to get there, so be it. Generational wealth will still end up on the winning side either way. That's how their wealth remains ... generational.

It is true that the future remains less than 100% assured. There is always an unpredictable element that keeps things interesting. But still, I know upon which side the Roacheforques are staking their claims. History proves that the odds are always stacked in their favour.
Posted by Roacheforque at 8:44 AM